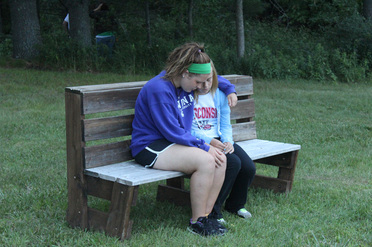 The Crucifixion of Jesus
Then Pilate took Jesus and had him flogged. And the soldiers wove a crown of thorns and put it on his head, and they dressed him in a purple robe. They kept coming up to him, saying, “Hail, King of the Jews!” and striking him on the face. Pilate went out again and said to them, “Look, I am bringing him out to you to let you know that I find no case against him.” So Jesus came out, wearing the crown of thorns and the purple robe. Pilate said to them, “Here is the man!” When the chief priests and the police saw him, they shouted, “Crucify him! Crucify him!” Pilate said to them, “Take him yourselves and crucify him; I find no case against him.” The Jews answered him, “We have a law, and according to that law he ought to die because he has claimed to be the Son of God.”

Now when Pilate heard this, he was more afraid than ever. He entered his headquarters again and asked Jesus, “Where are you from?” But Jesus gave him no answer. Pilate therefore said to him, “Do you refuse to speak to me? Do you not know that I have power to release you, and power to crucify you?” Jesus answered him, “You would have no power over me unless it had been given you from above; therefore the one who handed me over to you is guilty of a greater sin.” From then on Pilate tried to release him, but the Jews cried out, “If you release this man, you are no friend of the emperor. Everyone who claims to be a king sets himself against the emperor.”  When Pilate heard these words, he brought Jesus outside and sat on the judge’s bench at a place called The Stone Pavement, or in Hebrew Gabbatha. Now it was the day of Preparation for the Passover; and it was about noon. He said to the Jews, “Here is your King!” They cried out, “Away with him! Away with him! Crucify him!” Pilate asked them, “Shall I crucify your King?” The chief priests answered, “We have no king but the emperor.” Then he handed him over to them to be crucified.

So they took Jesus; and carrying the cross by himself, he went out to what is called The Place of the Skull, which in Hebrew is called Golgotha. There they crucified him, and with him two others, one on either side, with Jesus between them. Pilate also had an inscription written and put on the cross. It read, “Jesus of Nazareth the King of the Jews.” Many of the Jews read this inscription, because the place where Jesus was crucified was near the city; and it was written in Hebrew, in Latin, and in Greek. Then the chief priests of the Jews said to Pilate, “Do not write, ‘The King of the Jews,’ but, ‘This man said, I am King of the Jews.’”  Pilate answered, “What I have written I have written.”  When the soldiers had crucified Jesus, they took his clothes and divided them into four parts, one for each soldier. They also took his tunic; now the tunic was seamless, woven in one piece from the top.  So they said to one another, “Let us not tear it, but cast lots for it to see who will get it.” This was to fulfill what the scripture says,

“They divided my clothes among themselves,
and for my clothing they cast lots.”

And that is what the soldiers did.  Meanwhile, standing near the cross of Jesus were his mother, and his mother’s sister, Mary the wife of Clopas, and Mary Magdalene. When Jesus saw his mother and the disciple whom he loved standing beside her, he said to his mother, “Woman, here is your son.”  Then he said to the disciple, “Here is your mother.” And from that hour the disciple took her into his own home. After this, when Jesus knew that all was now finished, he said (in order to fulfill the scripture), “I am thirsty.”  A jar full of sour wine was standing there. So they put a sponge full of the wine on a branch of hyssop and held it to his mouth. When Jesus had received the wine, he said, “It is finished.” Then he bowed his head and gave up his spirit.

_Enter the Bible
The site was created by Luther Seminary to provide an opportunity for anyone to explore the Word more deeply.  Enter the Bible provides a look at the different times of the Bible, as well as extra resources such as videos, maps, etc.
Each week, you will have a chance to use this resource and read more about the books and verses of the Bible we are looking at.  To help with this, there are a series of questions that you will use the Enter the Bible site to answer.  This also gives a chance for parents to be involved- asking them questions and/or inviting them to join in the search for the answers.
This week, we are focusing on the Gospel of John
Step 1 - Go to enterthebible.org
Step 2 - Click on the link to the Gospel of John
Step 3 - Explore the material available to answer the questions below.

Where is John in the Bible?
Who wrote it?
What is it about?
What are the verses you read trying to say? (John 19:1-30)
What are three things that have helped you better understand the verses?
How can you take what you have learned, and apply it to your own life?

What is Lent?  Watch the video to learn more.
Food For Thought
In the video we learned that “Lent” comes from the Germanic word for “spring”!  That’s pretty cool to think about!  In the video, he talks about two reasons for Lent to mean “spring”.  The first is that the season of Lent takes place at the beginning of the season of spring!  The second is the idea of “spring cleaning”.  Now, spring cleaning is the process of going through all of the stuff and dust that builds up over the winter and cleaning things out, opening the windows to get the fresh air in, putting rugs and blankets out in the sun and wind to freshen them up.

If we think about Lent as a time when God is doing “spring cleaning” in us, that’s pretty interesting!  God is helping us to get rid of the worries and cares, sins and burdens that we don’t need to keep.  God is dusting us out, so our hearts don’t feel grungy.  God is opening up the windows and doors in our hearts to let in the fresh air and the sun...or should I say the Son!  With God’s help, Lent gets our hearts ready to take in and understand Christ’s loving sacrifice that we see on Maundy Thursday and Good Friday.

Praying in Color
Praying in color is a wonderful opportunity to speak with God that was introduced by Sybil Macbeth. In her book, she explained a time in her life where she felt unable to focus on the prayers she had for herself and others and so began writing names and doodling around them. She then found, after her 'doodle' was finished, that she had been praying throughout the doodles.  If you are interested in learning more, check out her website here or purchase the book, Praying in Color by Sybil Macbeth.  Another site for some wonderful examples and ideas is the Praying in Color blog.
Each week, there will be a day to explore a unique way of praying that also incorporates either the key verse from the day or simply from the Bible passage.  An example will be provided to give you a visual idea (see below).  If you want to send in a copy of your Praying in Color picture, you can email it to Jesse@lutherpoint.org or mail it to:

These will be used throughout the summer months as a chance for campers to see their own work as well as others.  For this week's Praying in Color, take a few of the phrases that connect to you and meditate on them, again using colors, shapes, lines, etc. to help you. 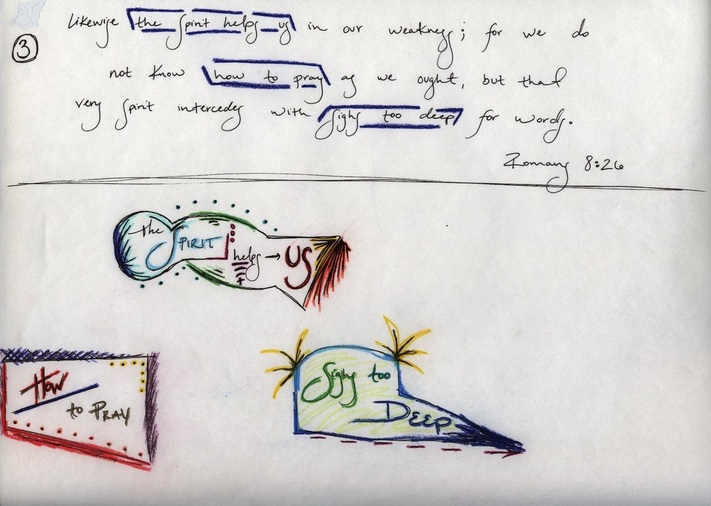 Service Project
Prayer Cards
Take a few minutes to make a list of the people that serve you on a regular basis - teachers, pastors, friends, parents, community members, etc.  Either buy or make thank you cards for each person or group of people.  As you fill out the cards, write two things inside: 1)  Why you are thankful for them and 2) What you are praying about for them.  As you seal the envelope, pray about what you wrote in the card.  Take time to hand deliver the cards to the recipients.