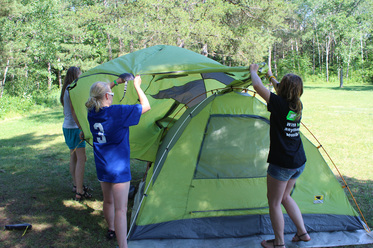 Jesus Teaches About Hospitality
Early on the first day of the week, while it was still dark, Mary Magdalene came to the tomb and saw that the stone had been removed from the tomb.  So she ran and went to Simon Peter and the other disciple, the one whom Jesus loved, and said to them, “They have taken the Lord out of the tomb, and we do not know where they have laid him.”  Then Peter and the other disciple set out and went toward the tomb.  The two were running together, but the other disciple outran Peter and reached the tomb first.  He bent down to look in and saw the linen wrappings lying there, but he did not go in.  Then Simon Peter came, following him, and went into the tomb. He saw the linen wrappings lying there,  and the cloth that had been on Jesus’ head, not lying with the linen wrappings but rolled up in a place by itself.  Then the other disciple, who reached the tomb first, also went in, and he saw and believed; for as yet they did not understand the scripture, that he must rise from the dead. Then the disciples returned to their homes.

But Mary stood weeping outside the tomb. As she wept, she bent over to look into the tomb; and she saw two angels in white, sitting where the body of Jesus had been lying, one at the head and the other at the feet.  They said to her, “Woman, why are you weeping?” She said to them, “They have taken away my Lord, and I do not know where they have laid him.”  When she had said this, she turned around and saw Jesus standing there, but she did not know that it was Jesus. Jesus said to her, “Woman, why are you weeping? Whom are you looking for?” Supposing him to be the gardener, she said to him, “Sir, if you have carried him away, tell me where you have laid him, and I will take him away.”  Jesus said to her, “Mary!” She turned and said to him in Hebrew, “Rabbouni!” (which means Teacher).  Jesus said to her, “Do not hold on to me, because I have not yet ascended to the Father. But go to my brothers and say to them, ‘I am ascending to my Father and your Father, to my God and your God.’”  Mary Magdalene went and announced to the disciples, “I have seen the Lord”; and she told them that he had said these things to her.

_Enter the Bible
The site was created by Luther Seminary to provide an opportunity for anyone to explore the Word more deeply.  Enter the Bible provides a look at the different times of the Bible, as well as extra resources such as videos, maps, etc.
Each week, you will have a chance to use this resource and read more about the books and verses of the Bible we are looking at.  To help with this, there are a series of questions that you will use the Enter the Bible site to answer.  This also gives a chance for parents to be involved- asking them questions and/or inviting them to join in the search for the answers.
This week, we are focusing on the Gospel of John
Step 1 - Go to enterthebible.org
Step 2 - Click on the link to the Gospel of John
Step 3 - Explore the material available to answer the questions below.

Where is John in the Bible?
Who wrote it?
What is it about?
What are the verses you read trying to say? (John 20:1-18)
What are three things that have helped you better understand the verses?
How can you take what you have learned, and apply it to your own life?

What is Easter all about?  Watch the video to learn more.
Food For Thought
There are two separate parts of this video.  In the middle of the video, this question is asked: “But what if the testimony of the women at the tomb was true?”  What is that testimony?  When the women went to the tomb on Sunday morning, they found it empty.  It was revealed to them that Jesus had risen from the dead, that evil and death no longer had any power because of Jesus love for us.

How did you feel during the first half of the video?  Did you feel worried? Doubtful? Sad?

How did you feel as the second half of the video began?

Sometimes the world feels like the first half of the video: dark, sad, too heavy for us to hold.  Easter reminds us that we don’t have to hold it and the darkness cannot win, because God defeated that darkness through the resurrection of Jesus Christ.  That means we can celebrate!  And we can proclaim the good news of Jesus’s love for us!

_Praying in Color
Praying in color is a wonderful opportunity to speak with God that was introduced by Sybil Macbeth. In her book, she explained a time in her life where she felt unable to focus on the prayers she had for herself and others and so began writing names and doodling around them. She then found, after her 'doodle' was finished, that she had been praying throughout the doodles.  If you are interested in learning more, check out her website here or purchase the book, Praying in Color by Sybil Macbeth.  Another site for some wonderful examples and ideas is the Praying in Color blog.
Each week, there will be a day to explore a unique way of praying that also incorporates either the key verse from the day or simply from the Bible passage.  An example will be provided to give you a visual idea (see below).  If you want to send in a copy of your Praying in Color picture, you can email it to Jesse@lutherpoint.org or mail it to:

These will be used throughout the summer months as a chance for campers to see their own work as well as others.  For this day, praying in color will be used to help you memorize the key verse, or another verse if you would prefer.
Step 1 - You can break down the verse into as many pieces as you would like.
Step 2 - Pause on each section of the verse as you write it, to decorate it and help hold it in your mind.
In the end, you will have a beautifully created picture of the verse, as well as a good start towards memorization. 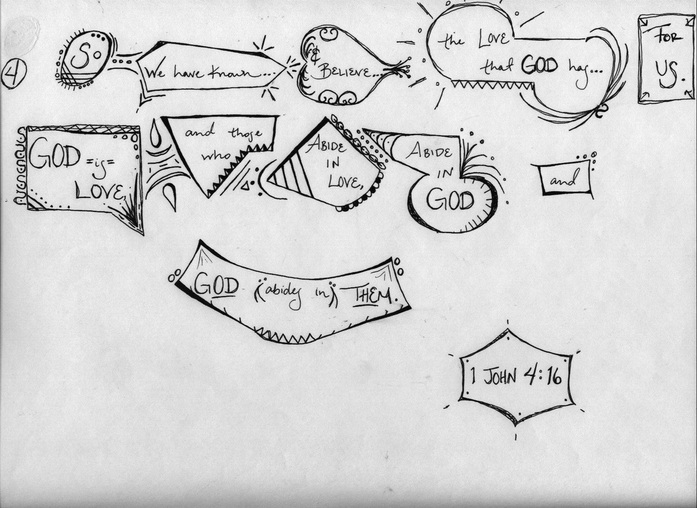 Service Project
Standing Up For Others
Part of hospitality is making sure that people feel welcome and safe in all the moments of their everyday lives.  Unfortunately there are many times and places where this doesn't always happen - school, hanging out with friends, the bus, and even Facebook.  Being hospitable means standing up for others so that they don't have to feel afraid or unwelcome.


As a family, talk about these questions:


Think about the people you identified as being picked on or slighted during your day.  Make a plan on how you will stand up for them the next time you see them being picked on.  Here are some suggestions:


This activity is adapted from "Standing Up For Others" by Jolene Roehlkepartian, found on Vibrant Faith @Home (its a great website, check it out)